And you thought the LSAT was hard! Logic problems involving others’ minds 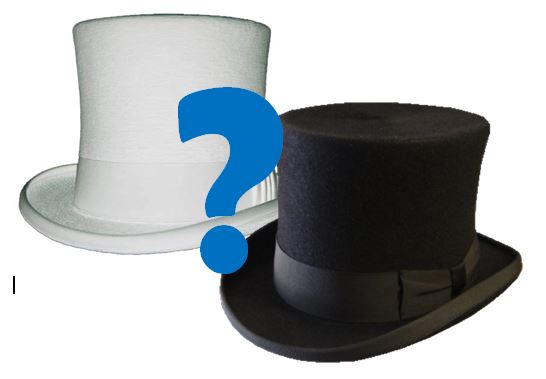 Sometimes to solve a puzzle, you have to think about what other people are thinking.

This Christmas vacation, don’t ask me how, but at one point our dinner discussion turned to a logic problem.  It’s an interesting puzzle, because it requires thinking about what other people do or do not know, and what they can or can not figure out based on their knowledge.  I realize that this problem has two forms, easier and harder, but they both involve the same backstory, something like the plot to the opera Turandot:

Prince Peter travels to a nearby kingdom to ask the king for the princess’s hand in marriage.  Unfortunately, two other princes are also there to make the very same request.  The king takes advantage of the competition to marry his daughter off to the smartest prince; he pits them against each other in a battle of wits.  The king seats the princes at a round table and blindfolds them.  “I have five hats,” he tells them.  “Three of them are white, and two are black.  I am placing one hat on each of your heads, and I will hide the other two.”  As he does so, he tells the princes that he will shortly remove their blindfolds.  “The princess will go to the first prince to correctly identify the color of his own hat,” he explains.  “If you guess incorrectly, I will kill you.  If you cheat by looking at your hat directly or in a mirror, I will kill you.  Don’t answer until you have correctly surmised the color of your own hat!”  He then has his assistants remove the blindfolds simultaneously.  The princes look at each other’s hats.  None of them offers an answer for several minutes.  Finally, Prince Peter laughs with delight.  “Of course!” he cheers.  “My hat is _______________ !!”  He and the princess live happily ever after.

The hard version of the question leaves off here, and simply asks, “What color was Peter’s hat, and what colors were the other princes wearing?”  You can try your hand at this question first, and if you’re stumped, peek at the clue in the easier version.

To view the clue, highlight the blank area below this line:

The “easier” (but still hard) version of the question adds, “Prince Peter saw that the other two princes were both wearing white hats.  What color was Peter’s hat?”

In order to arrive at the answer to this question (which I’m not going to post today), we have to give some thought to what the other princes would know / think, and how they would react, if they saw certain colors.  We have to assume that the princes are acting rationally (because of the high price for random guessing) but that the others have either less information or less intelligence than Peter.

This problem reminds me of a moment when I was listening to the radio at about age 12.  The DJ announced that he would award a cash prize to the 10th caller.  My first thought was, “If I wait enough time for nine people to call, then I can call and be the tenth.”  But then I realized, “Wait a minute.  Everyone else will be playing by the same strategy!  They are all going to wait and try to be the 10th caller.  Since nobody will even start to call for ten minutes, I’ll wait for 20.”  This turned into an infinite regress: “But wait.  Everybody will think the same thing again, so they will all wait 10 minutes longer, so I should delay longer … on and on to eternity!”  I wondered how this game could possibly be won.  I was flabbergasted when the song ended four minutes later and there was already a winner!  People had rushed to call!  That wouldn’t make any sense unless they hadn’t thought it through — or unless they knew that at least nine other players wouldn’t think it through.  I learned that sometimes to win a game, you have to be irrational or to assume that you are playing against unintelligent or irrational competitors.

Finally, we come to the hardest logic problem I have ever heard.  In this problem, the rules are that each player is infinitely intelligent (but not clairvoyant).  The judge selects two different natural numbers, m and n.  (The natural numbers are the counting numbers:  1, 2, 3, 4, 5, …).  The judge reveals the numbers’ sum (m + n) to Player 1, and he gives their product (mn) to player 2.

“I do not know what the two numbers are,” says Player 1.

“Oh, then I do know what the two numbers are!” says Player 1.

What are the two numbers?

In an ideal world, I won’t have to reveal the answers to these puzzles because someone else will in the comments below.  Is that a rational assumption?  😛